BOOKLIST – Starred Review
“Daniel Blackland, a professional (if fairly small-time) thief, is hired by his uncle, a crime lord, to break into a supposedly impenetrable stronghold and steal something so rare, so important, that others will kill to get it back. Sound like a typical caper novel? Let’s add in some details. Daniel is the son of a powerful magician who was killed many years ago by the Hierarch, the ruler of the Kingdom of Southern California, and the object he’s trying to steal is a sword, made by Daniel’s father, that possesses the magical essence of Daniel himself. This wonderfully imaginative story is set in an alternate-reality Los Angeles that will seem both familiar (the author mentions Topanga Canyon and Rhino Records) and weirdly unusual (the city has an elaborate canal system, like that in Venice, for example). In this world, the bones of magical creatures contain remnants of their powers; if you consume these ancient bones, or the bones of magical people living today, you acquire their magical properties (when the Hierarch killed Daniel’s father, he, um, ate him). The story is structured like a caper novel, and fans of stories about heists will enjoy it, but its fantastical elements make it an absolute must for urban-fantasy readers, too.”
LIBRARY JOURNAL – Starred Review
“In the Southern Kingdom of California, Daniel Blackland is a thief and an osteomancer, able to use the magic imbued in certain bones to give himself power. As a child he witnessed the killing of his father by the mysterious ruler known as the Hierarch and then went underground. The local crime lord wants to hire him for a job, but Daniel isn’t interested until he hears that it might finally be a chance for him to steal back a weapon made by his father that contains Daniel’s own bones. He puts together a crew to break into the Hierarch’s compound, but even the best thieves in Los Angeles are going to have a hard time stealing from the most powerful man in California. VERDICT In van Eekhout’s (Norse Code) first hardcover for adult readers, a combination of caper novel and urban fantasy packs a wallop. Daniel and his team banter even while up to their necks in danger, and the magic system in which eating the bones and flesh of creatures can grant you their power is unique and fascinating (if a little icky). Highly recommended.”

RT REVIEW OF BOOKS – 4 1/2 Stars
“From the La Brea tar pits to the Santa Monica pier, (van) Eekhout creates a mischievous version of Los Angeles where magic and alchemy reign. Daniel Blackland is like Sandman Slim’s friendlier younger cousin, tasked with finding a family heirloom, perfecting his magic and figuring out just exactly who he is. The first in a trilogy that also stands well on its own, California Bones is hilarious, touching and will leave readers craving an L.A. burrito, or five.”

REVIEWS for The Boy at the End of the World

KIRKUS REVIEWS
“Part speculative fiction, part cinematic survival adventure, the novel features a brisk pace and clever and snappy dialogue. The real, scary possibility of human destruction of our own environment is tempered by this diverting tale of the possibilities of continued existence and the meaning of hope, friendship and community.”

LIBRARY MEDIA CONNECTION
“The characters are well developed and the moral dilemmas are sound. This is an excellent beginning for science fiction readers and the study of dystopian society. Recommended.”

BOOKLIST
“The author of Kid vs. Squid (2010) repeats with another quirky, high-stakes adventure hung about with oddball ideas and life-threatening hazards… Van Eekhout moves his tale along briskly to a violent, suspenseful climax… A pleaser for readers who prefer their sf livened up with unpredictable elements and emotional complexity.”

HORN BOOK MAGAZINE
“The adventures of Fisher and Click, like those of Luke Skywalker, R2-D2, and C-3PO, told in fast-paced prose and set in a boldly imagined future, will be exciting for young readers who will, no doubt… plunge on with Fisher’s brave journey in a new world.”

THE BULLETIN OF THE CENTER FOR CHILDREN’S BOOKS
“The title is no angsty exaggeration…van Eekhout manages to stop short of environmental lectures for the most part, trusting that the bemused discussions about golden arches and unhealthy eating habits will be resonant enough on their own, and keeping most of the focus on Fisher’s quest. With a relatively small cast of characters, fairly straightforward adventure plot, and a child protagonist, this novel is a good choice for readers a bit younger than those for whom end-of-the-world scenarios are usually written.”

REVIEWS for KID VS. SQUID

SCHOOL LIBRARY JOURNAL
Thatcher is reluctantly sent to spend the summer between sixth and seventh grades helping his great-uncle Griswald run his Museum of the Strange and Curious on the boardwalk of the fictional coastal tourist town of Las Huesas, CA. When a girl, Shoal, breaks into the museum and steals a witch’s head, Thatcher pursues her. He soon finds himself in a world of maritime monsters that might’just might’be plotting to destroy civilization. He allies himself with Trudy, a girl with the tools and the talents of a detective, and eventually with Shoal, to save the world. (The Squid doesn’t appear until the end, but it’s worth the wait.) Van Eekhout carefully balances his tongue in his cheek with some really creepy situations, and the result is a humorous fantasy that will rush over young readers like a tidal wave.‘Walter Minkel, Austin Public Library, TX

KIRKUS REVIEWS
A lad goes from dusting the exhibits in his great-uncle’s decrepit museum of oddities to saving the coast of California from watery doom in this wry crossover debut. Thatcher’s sleepy vacation takes a sharp turn toward the exciting when he discovers that the oddball barkers and vendors along the local boardwalk are actually remnants of the last outpost of Atlantis—returned to life each summer thanks to the curse of Skalla, a beheaded witch. Actually, Skalla is still around, or at least her head is, delivering curses and transforming human victims into giant lobsters and other sea creatures. After centuries of preparation, she is also finally poised to raise up her own Atlantis with a massive tsunami. Drawing together a memorable supporting cast that ranges from a half-human Atlantean princess to a genial shark-man (“Howdy-do. Swim with us to shore or we’ll eat your legs”), van Eekhout chivvies the plot along at a lively pace to a hold-your-breath climax and a deftly choreographed resolution. He also leaves the main characters around for sequels–which in this case, at least, could be a Good Thing.

BOOKLIST
Thatcher Hill is a little mortified to be spending the summer with his weird great-uncle Griswald in his superweird Museum of Curiosities on the coast. And things just keep on getting weirder and weirder after a young girl breaks into the museum and absconds with the What-Is-It?? (which might be a severed head in a box, or just a wrinkled old melon). It turns out that she is a princess of the cursed people of Atlantis, who are doomed to spend their winters floating half drowned at sea and their summers hawking schlock on the boardwalk. Thatcher, helped by the princess and another girl, dukes it out with a slimy, scaly, betentacled cast of monsters (controlled by the head in the What-Is-It??) to try to find a way to reverse the curse. The internal logic of the story is joyfully convoluted and not even close to airtight, and although the book is better at being funny than being exciting, it does offer a fair share of both en route to the showdown promised by the title. Grades 4-7. –Ian Chipman

BIB-LAURA-GRAPHY
“…the fast pace and constant action will pull readers along, making this a great choice for reluctant readers.  Between the great action, the sense of humor, and the mythology of the lost City of Atlantis, I would definitely hand this to my younger Percy Jackson fans.” Read full review here.

KIWI MAGAZINE ONLINE
Kid Vs. Squid is an action-packed novel about a boy, Thatcher, spending his summer vacation with his crusty old uncle, Griswald, who owns the strange museum in Los Huesos, California. Griswald has many rare finds from shrunken heads, to an octopus wearing sneakers! When one of the artifacts by the name of What-is-it? Is stolen, Thatcher is thrown into a whirlpool of mysteries, battles with giant squids, and a crazy bodiless witch by the name of Skalla. He and his two friends battle their way to save the coast of California, and their summer vacation. It’s extremely funny, and in Thatcher’s point of view, it makes everything seem so carefree! I definitely would tell a friend to read this book, if they were feeling down and needed a good laugh! — Reviewed by Bookworm Buddy Marin (Age 14) from CA

PUBLISHERS WEEKLY
Short story author van Eekhout makes a successful leap to long fiction with this thrilling urban fantasy. As human civilizations crumble, Valkyries prepare for Ragnarok by using DNA testing to select perfect warriors for their army of the dead. Resurrected NorseCODE operative Mist loses faith in the project after a tragic accident, and she goes AWOL. After Mist encounters the near-forgotten god Hermod as he investigates portents of doom along the California coastline, the two journey into the afterlife of Helheim, where they make some unexpected allies. With deities scheming and ancient prophecies coming true, can a reluctant Valkyrie and a world-weary god prevent the apocalypse? While a few aspects of the conclusion don’t quite hang together, the compelling prose and epic blend of mythological and modern elements make it clear that van Eekhout is an author to watch. (Review Copyright Reed Business Information, Inc.)

FANTASY LITERATURE
Stop. Look closely. Look beyond the typically stylish urban fantasy cover (the one with the nicely built young woman holding her weapon of choice with an air of defiant competence). Look beyond the title that’s both serious and punny. Inside, through pages inked with the shadows of ravens, you’ll watch the long-foretold cataclysm of Ragnarok as it rolls in a relentless wave from the dry, gray plains of Hel to … the dry, black asphalt of a California parking lot. And if you’re partial to Norse mythology or urban tales driven by fascinating characters and laser-crisp writing, you’ll enjoy it. Verily, by Thor’s hammer!

The product description/back cover summary nicely provides the premise for this novel, the debut of the gifted Greg van Eekhout. Not only has he forged ancient myth and modern culture into a cool, sleek alloy, he’s done so with drama, conspiracy, humor, and (I never thought I’d say this about an urban fantasy novel with a nubile warrior-maiden on the cover) even a few touches of artistic inspiration and genius, including the use of Odin’s raven Hugin (Thought) as an occasional narrator and a blink-quick invocation of the American Gothic painting in an all-out battle, to pick two.

Norse Code is simply an impressive debut. I can only guess it was printed solely as a mass-market paperback because it is a debut and because readers without passing familiarity with Norse mythology may find themselves a little numb with mythic-culture shock. Still, it has all of the aforementioned virtues, as well as gods who enjoy long walks on the beach and Mountain Dew, plus one of the coolest swords ever. Though I don’t know if it’s powerful or meaningful enough for a second reading, I highly recommend it for a first reading (and purchase) by fans of Norse mythology or well-written urban fantasy.  Four bright stars that won’t easily be devoured by wolves anytime soon. — Robert Rhodes, Fantasy Literature 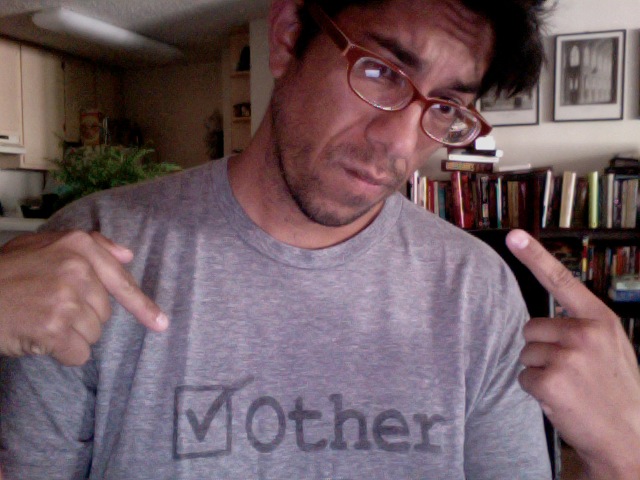 Greg van Eekhout is the author of the contemporary fantasy trilogy from Tor Books, California Bones: California Bones (out now), Pacific Fire (Jan. 27, 2015), and Dragon Coast (Fall, 2015). His other books include the middle-grade novels Kid vs. Squid, The Boy at the End of the World, and the mythological fantasy novel Norse Code.