This is my dad in 1960 getting on a plane in the Netherlands, bound for New York and, eventually, for Los Angeles. 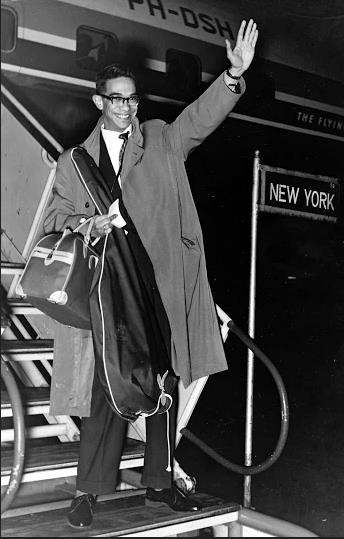 Like my dad, my mom had lived in Holland for a bit over a decade after Indonesia got too dicey for Dutch colonials and their mixed-race descendants. So my mom came to the US in 1959 with her parents and siblings, and my dad followed once they were settled and all his immigration paperwork was in order and approved and he’d lined up an American citizen willing to sponsor him (arranged, I think, by a Catholic charity). I wish I’d asked him and my mom more questions about the actual process, but I know Indos (people of mixed Indonesian and European ancestry) came to the US under refugee legislation.

Only twelve years before my parents immigrated, the US was still applying strict immigration restrictions to Indos. Very few were allowed in the country.

Dad lived with my mom’s family in a tiny two-bedroom rented house in Venice, California until they got married two years later and rented another house on the same lot as my grandparents’. That’s the house I grew up in until the age of seven.

Look at my dad’s smile. He’s happy, excited, optimistic. If you knew my dad, these were not his default states. He’d been through stuff. He’d seen some shit. It damaged him.

I try to imagine what would have happened if he’d shown up to the airport after waiting a year or more, his papers all in order, with a suitcase or two and a guitar, ready to get on that plane and start his new life. And then I imagine him being prevented from boarding his flight. Or him landing in New York and being told he had to go back because Dwight. D. Eisenhower, without warning, signed an Executive Order in the night denying him entry. Or the same with my mom’s family, who arrived in New York by ship.

It would have been a bad thing. I might not even exist right now.

We’re not safer because of this. We’re just worse.

Please call your representatives, or talk to your persuadable friends, or examine your own views, or send a letter to your newspaper, or donate money to the ACLU, or something else. Ideas in the link.

5 real things you can do right now to fight Donald Trump’s Muslim ban.