Yesterday was May 19, 2019, ten years from the release date of my first novel, Norse Code. It’s the story of people resisting powerful jerks who conspire to spark a cosmos-spanning apocalypse for selfish gain. Which sort of came true, so I guess I’m a prescient genius, hey, me. It’s very far from a perfect book. The pacing is erratic. My desperation to keep the story moving is painfully evident at times. There are a few wincingly problematic ele 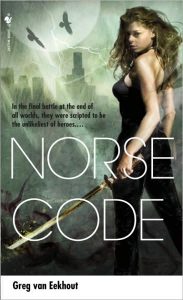 ments. Overall, though? I’m proud of this little book.

Norse Code came out in 2009. The global economy was a flaming wreck. Businesses were swinging scythes through their workforces, and my truly brilliant editor got laid off six months before my release date. There was no publicity plan. I’m not sure I actually had an assigned publicist. There were no advance reader copies, just a small number of bound typeset pages sent off to a small number of people. My agent at the time told me Norse Code would probably never earn back its modest advance. Can’t get mad at that stuff. I was a debut author with a paperback original in a tough time.

And I had some terrific support. Shawn Speakman stepped up at the publisher’s website to promote the book. Pablo Defendini and Theresa Delucci and Patrick Nielsen Hayden used Tor.com to help. Which is particularly amazing considering Tor didn’t even publish Norse Code. Bloggers and reviewers and friends whom I embarrassingly had to lean on for blurbs were extraordinary generous. But, really, I expected the book to disappear after six months.

By the time it came out, I was under contract with a different publisher for a pair of middle-grade novels. I’d kind of moved on. But here we are, ten years later. The book never became a break-out success, but it’s still in print and it did earn out that modest advance, and my seventh novel, Voyage of the Dogs,  came out in paperback a couple of weeks ago, and my eighth novel, Cog, will be released in October.

I’m still doing this. I’m still hustling. I’m still a novelist. I love this job. It can be hard and unglamorous and demoralizing at times, but it’s still the best job I’ve ever had and I’ll keep doing it as long as I can. And it began with a little book that did better than it had any right to.

Happy birthday, little book. I still kind of love you.