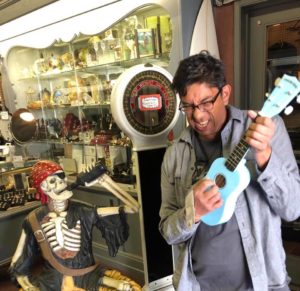 One year ago today I bought my first ukulele. We were staying downtown at Comic-Con, and I’d been playing my guitar quite a bit, but I’d left it at home and wanted something to strum. So I hoofed it a few blocks over to a pawnshop, saw this uke hanging on the wall, handed over my debit card, and beep-boop-beep they took fifty of my dollars (about twenty bucks more than I could’ve gotten the same uke elsewhere, turns out). From there I settled down at the Marriott poolside bar, looked up how to tune a ukulele on my phone, learned “You Are My Sunshine,” and fell in love.

I don’t really like ukulele music, not even when played by a great musician. It’s just not my thing. But I loooooove playing. Ukulele is so much easier than guitar. There’re only four strings! F-major, notoriously hard and gross for beginners on guitar, is just two strings on the uke. The string tension is low and the nylon strings are easy on the fingers. Everything I’ve ever played on guitar has sounded stiff and tortured and bad and learning a new song has always been a labor. But on uke I can play some Beatles, some Neil Young, a little Steve Earle, Tom Petty, Foo Fighters, Eddie Vedder, Nirvana, and Leadbelly (by way of Nirvana). I’ve even written couple of little ditties myself.

Listening to music has always been a big part of my life. Being able to pick up an instrument and play something myself has amazing. It’s exercised my brain and my fingers in ways that previously eluded me. It’s been a solace and a distraction in these troubled times. It is just so much stupid fun. Walking into that pawn shop was one of the best things I’ve ever done.

That said, I just ordered this inexpensive little parlor guitar because guitars are still the awesomest.